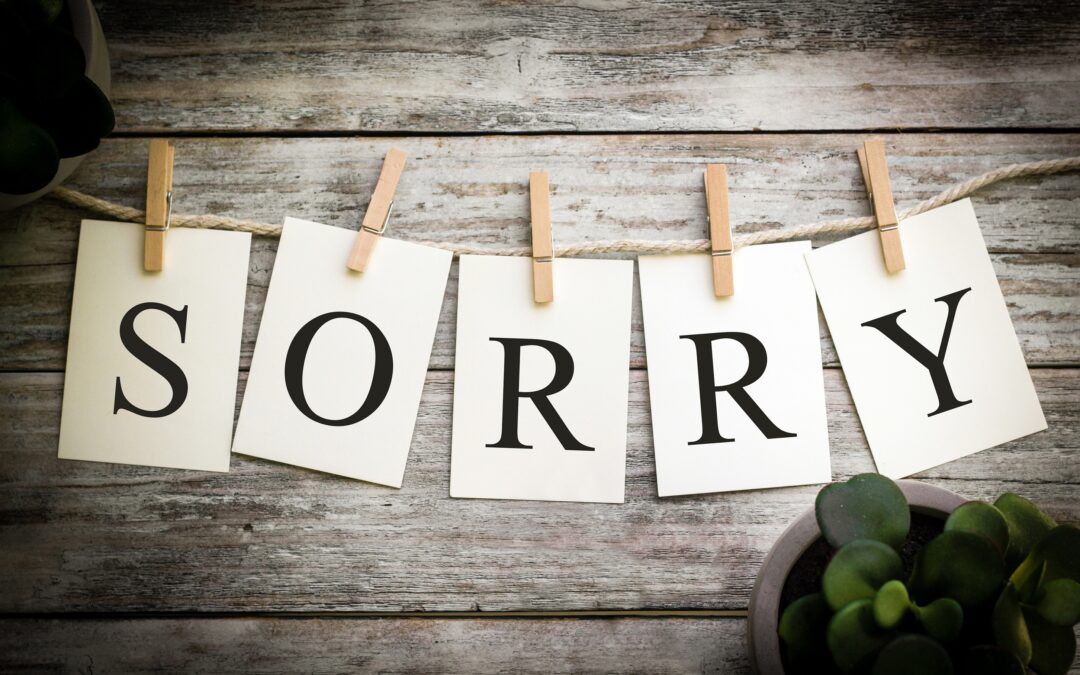 Have you ever noticed that the best way to diffuse a “hostile” situation is to apologise?

Yet surprisingly, for a number of illogical reasons, when people have a difference of opinion, or when someone does something wrong, we see people often stand their ground and refuse to apologise.

Without an apology it is difficult to move on.

In fact, without an apology, two protagonists can be stuck at a place in time for a very long period of time.

A simple apology could have saved a lot of angst for both of these friends, as well as for their circle of friends.

“Hold me now, it’s hard for me to say I’m sorry
I just want you to know”

And for some people it can be very difficult to apologise.

Last night my family and I ventured out to dinner, and we booked an Uber car to take us to the restaurant.

The route was one that we had travelled many times, and we knew the route well.

However, on this night, and on this trip, the Uber driver failed to follow his navigation and ended up a mile off course.

When I suggested to the driver that he had gone off course he denied doing so, but it was very clear that he had “missed” an exit from a motorway and continued driving in an incorrect direction.

Upon being questioned by me the driver immediately turned off the meter. However, this also turned off his navigation and so he asked me whether we wanted to leave the car.

I suggested that he should continue on to the restaurant. Because he had turned off the meter, we now needed to use the navigation on my phone to do so.

I told the driver that I believed he had deliberately missed the exit in order to “pad out” the fare, as his navigation GPS would have explained his route very clearly. The exit he needed to have used was also very well signposted.

He denied this padding, blaming the motorway tunnel and a poor signal for the navigation error, which of course was an untruth and a concocted excuse.

If the driver had been honest with us from the get-go he would have declared his mistake as soon as it had occurred some two minutes prior to me “outing” him.

But he had remained silent for at least two minutes…

If the driver had indeed made an error or miscalculation with his navigation, an immediate admission and apology would have diffused any aggravation to his passengers before they realised that they were being clipped.

At no point through the remainder of the journey did the Uber driver offer an apology. He only offered excuses.

As I left his car, I told the driver that I was going to have to leave him a one star review, to which the driver challenged me and said:

“Haven’t you ever made a mistake?”

But the driver offered no apology.

In your business, have you ever made a mistake?

Have you found that the simplest and easiest thing to do when there is a mistake is to admit your error, apologise, and make things better immediately…

Don’t ever be so proud to not apologise.

An apology is a great diffuser.